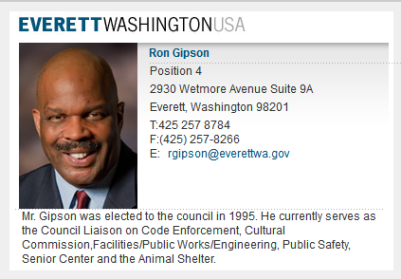 16} Evidently the city of Everett can’t even design their own logo so they chose a 1/2 plagiarized one. Makes you wonder how this kid is connected to someone in city hall

17} Lovick is showing the world his true stripes & spots now.. His henchmen are threatening council members & now the taxpayers are going to have to pay 15K to an attorney to figure out if they “did anything wrong” because Lovick a former LEGISLATOR & POLICE OFFICER is too flipping dumb to figure it out by himself, I mean WHY would he know anything about the LAW?
The story goes Councilmen Somers, Ryan & Klein did something Wright, Sullivan & Lovick didn’t like ~ more correctly they refused to kiss his butt, he only has 2 cheeks you’d think Wright & Sullivan would be enough & Christman & Ericks are firmly attached to one of them.
So Mark Ericks the Deputy County Executive & Dan Christman the Medical Examiner’s Deputy Director threaten Somers, Ericks says he would kill Somers if it wasn’t for jail time but then Kristenson offers to write out a death certificate for Ericks if he did, yet Snohomish County Executive John Lovick said there’s no evidence that his top deputy threatened or harassed county councilmen. WTF?
This happened right about the same time as the Marysville Pilchuck shooting & in this day & age we ALL need to take workplace violence or threats of violence VERY seriously. We are talking about 3 former law enforcement officers with a history of instability & complete inability to play well with others. The council vote took away 17,500 dollars of Ericks money & totally eliminated Christman’s job: Trust me people have killed for FAR less then this.
So it looks like we have a real life Twilight saga on our hands although I don’t know if Wright or Sullivan even count for anything they are always on the butt-kissing team, so if popular consensus jumps to the other side they will too. Too bad we can’t send them all to Forks for real & let Chief Bart sort it out over there. Maybe the next time Councilman Sullivan is out drinking & driving he can drive into a wall & unscramble his brains a bit but I think his brain is too far pickled for that.
Team Somers: Somers, Ryan, Klein,
Team Lovick: Lovick, Ericks, Christman, Sullivan, Wright,
So Lovick wants to build a fancy new courthouse & wants the Council to figure the budget out so he can see if it’s going to fly or not, he carries NO responsibility & can throw them under the bus if someone cries foul on the budget with a veto, so now that it is known that they are going to cut the first steps to keep their courthouse moving ahead he all of a sudden becomes a righteous indignant moral man. John step out of that suit, it doesn’t fit you & by the way you got a little ugly on your personality there.
John Lovick has shown his utter impotence & inability to carry out so much as daily activities in regards to county business, he fails to prosecute his friends, or hold anyone accountable as long as they kiss his butt. He has surrounded himself with unstable incompetent bullies so if anyone challenges him he can take them out one way or another BUT the moron voters put him there, they voted for stupid so stupid is what they get with a big helping of upcoming lawsuits.
Lovick made the announcement Thursday after performing his own fact-finding inquiry into comments made by Deputy Executive Mark Ericks this fall during closed-door meetings.
He was responding to a formal complaint that council Chairman Dave Somers filed Nov. 18, accusing Ericks of having said he would kill Councilman Terry Ryan “if it wasn’t for jail time.” Somers also recounted an episode in which Ericks allegedly laughed when another manager joked about drawing up death certificates for Somers and Ryan after calling Ryan a terrorist. “What I’ve determined is that no threats were made,” Lovick said. “I’ve interviewed a lot of people at the meeting and no threats were made.”
Lovick, Sullivan and Ericks all served together as Democrats in the state House of Representatives, Christman used to work with Ericks at the Bothell Police Department. Ryan and Lovick, however, have a history of disagreements dating back to their time together on the Mill Creek City Council according the Everett Herald.
Lovick is so supremely threatened by any challenge to his perceived Imperial Rule that he has no problem throwing anyone & everyone under the bus. As evidenced by his last inter office power struggle in February, when a council majority voted to extend the amount of time the auditor’s office would remain under the county auditor, instead of the executive. Lovick later vetoed that decision and now has authority over the tech department.
18} Evidently John Koster is not properly versed in the ways of kissing Lovick & the Council’s behind either as he sided with the Freedom Foundation on union issues on his own time, not on county time which is totally absolutely amazing in & of itself. So now they are trying to get rid of him too.
If you haven’t figured it out by now here it is: Wright is pissed because Somers is now the council chair so she lost her little stipend & power she thought she had.
Lovick is running scared because Koster & Somers could run against him & he couldn’t handle the competition.
All of his buddies that he promised jobs & money to are pissed because the council is blocking him & even getting rid of his buddies & their raises.
EVERYONE in the county is getting sick of Democratic rule & the endless lawsuits & incompetence so if Councilmember Klein did decide to run at this point he’d probably win or atleast give them a run for their money which they can NOT allow.
The general consensus is that Klein was just a sandwich maker for Microsoft ~ what that says to me is that he is a man who has had to work for his money so he would understand the working middle class & poor people better then any of those little silver spoon snots turning Snohomish County into a kindergarten playground.