We all know Ferguson’s office is in trouble for destroying public records in the Oso lawsuit.

There will be fines to pay and atrocities to sweep under the rugs… I hope that we all know that it is the taxpayers who will pay these fines, not anyone personally responsible for the mess.

That’s called “Politics as Usual” here in this state.

After getting canned by Pete Holmes at the city of Seattle for her relentless harassment against the gay community you know she had to resurface somewhere, and of course it’s for the attorney general’s office.

She is nothing more then just another taxpayer liability with a history of malicious attacks and prosecution.

Well it was a loss for the AG’s office and a big win for a 78 yr old man between August 15th and August 30th.

Actually they don’t put hardly any of the cases they lose up there unless there is too much media coverage to deny it.

For those of you who don’t know: Robert Caruso is a 78 yr old man, who was battling colon cancer and multiple hernias at the time when he was accused of rape.

The woman who accused him of rape was high as a kite and got into a wreck, she asked Mr Caruso to hide her out until she could get sober.

Next thing you know she is claiming that Mr Caruso, slipped her the drugs, held her down, handcuffed her and raped her and then went to sleep. She then  rips him off after he fell asleep.

Now I have been the victim of sexual assault, and there is nothing more that I hate in this world then a rapist but none of this story rang true. None of it.

The newspapers were telling so many details that I was sure there’d be no case after they were done, even down to the color of this woman’s underwear. It was like a media blitz to convict him in the court of public opinion. 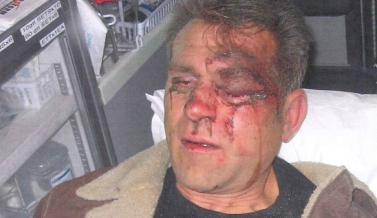 Once he is associated with anything you know that there is a vendetta going on.

Add to the fact that Mr Caruso had the gall to run against Mr Tucker for county prosecutor, so he already had an axe to grind with him.

He tried getting him disbarred but that failed thanks to Steve Eugster (who they also went after).

Once I heard that Bob Ferguson’s office was going to prosecute the case I was sure the fix was in and it was.

Even Judge Maryann Moreno got in on the fun and refused to let Mr Caruso’s attorney’s enter any evidence as to this woman’s past or character.

So what was the evidence, or lack thereof?

She claimed he handcuffed her, yet her DNA was not on any handcuffs

She claimed he gave her drugs and held her down and raped her, and the week before that she also claimed that another man did the same exact thing.

She was out of jail under the stipulation that she stay clean and sober to get a chance to work at getting her newborn back from CPS.

She claims to have been vaginally and anally raped by Mr Caruso and from what the results say she did have multiple male contributors in the DNA profiles in both cavities: but Caruso was excluded and willingly gave his DNA at the time he was accused.

Both parties agree there was some type of sexual activity that was consensual but that is where the agreement splits.

She was prostituting at the same time to feed her drug addiction and although Mr Caruso seems to feel sorry for her, it is a slap in the face to real victims of rape who have to go through the rigors of rape kits and interrogations when they are truly victimized.

She also claimed her phone wasn’t working yet she called her mother and several other people, 34 phone calls from her phone and even more from Mr Caruso’s phone – which she later stole.

Now according to her she was brutally raped yet she managed to show up at a casino for a cage fight a few days later.

Which again brings me to the fact that Mr Caruso was battling colon cancer and had 2 hernias at the time. He wasn’t strong enough to open jar lids let alone hold down a methed up fighter.

Bob Ferguson, seen all of the evidence and instead of saying “get the hell outta here” he figured out a way to try to trump up charges to try to make it stick: He charged Mr Caruso with with 10 different types of rape. You know, throw everything at the wall and see what sticks.

Atleast the jury was smart enough to figure it out.

Mr Caruso didn’t even have to take the stand, and within 2 and a half hours the jury had found him not guilty.

All of this came at a cost for us and for Mr Caruso. It cost us taxpayers almost a million dollars to bring these charges.

He was fighting for his life against the cancer, and the corruption. So much for the “Golden Years”

Vote for Ferguson if you want to make sure we run our courts based on vendettas.

This idiot wants to be reelected, please don’t be the ones who that make that happen.

I don’t know who is running against him but we’d do better with Pee Wee Herman at this rate.

Just wait, lets see if Mr Caruso wants to take up suit against the state: that is going to be a CLEAR case of malicious prosecution.

Oh and just as a comical side note: The instigating officer got his panties in a bunch because he didn’t feel he was given the proper respect and he resigned… After he was disciplined and suspended concerning this case.

Now if we could just teach the rest of them that nifty little trick we’d be just fine.